A combination of factors including Covid 19 has led me to make this landmark decision. Fully endorsed by my better half, I feel it's the "right time". I've "done my bit" over the years. Cloth will be cut accordingly and we'll manage fine.

I won't miss anymore Birds now, at least through work, it will just be a question of selection, access and affordability! No plans at the moment, just a time to enjoy the superb Spring weather and garden out here on the East Coast.

Feels good...at the moment. I'm sure it will last!

My new staus should give me more time to develop my Blog and hopefully provide some interesting posts for you. Time will tell...

Been (VERY) quiet lately on the dicky-bird front. 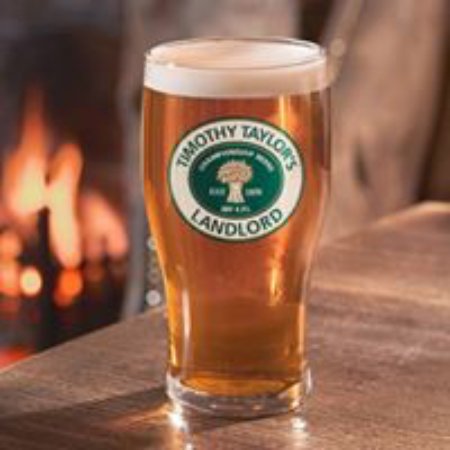 Having been a good lad since March 23rd (unlike some/many) I'm looking forward to when things improve (whenever that may be). Interpretation of "rules" seems somewhat grey to say the least!!!

I've really enjoyed doing a "full" Spring in the Village but variety IS the spice of life, so some trips furhter afield would be nice. Again...selective as always.

It will be interesting to see if some birds have been suppressed during this time. I realize it's academic but I'm a curious soul.

Let's hope things are more positive this Autumn? After all, I've (provisionally) booked my spot on Scilly for October. There's positivity for you.


I'm still busy transferring (and reminiscing) records from my beloved Bird Recorder to eBird. The perfect time to do it. Many great memories...and some gripping ones! It's funny when you look back and wonder why you acted...or didn't...on certain occasions. Hindsight eh...

Posted by Alan Whitehead at 14:52 No comments: 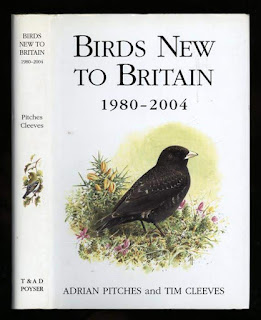 I've been reading this book for a while now (I'm a slow/reluctant reader). I jumped on the Rare Bird Bandwagon in 1989 with the DOUBLE-CRESTED CORMORANT at Charlton's Pond, Billingham. Not a bad introduction as it's turned out! Rarity value rather than aesthetic charm. My biggest regret is not going for the GOLDEN-WINGED WARBLER later the same year? I guess that sums twitching up in a nutshell! It's ironic now looking back, as I was going to Norfolk and Suffolk, albeit as part of a team on occasional Sundays (young family and all that) but considered Kent too far to justify!? Ah well. The GREAT BUSTARDS of 87 are also still a painful if distant memory...although just to add balance, I did eventually score with the RED-BREASTED NUTHATCH in 89. After dipping it in the initial scrum, I connected the following Spring, in far more relaxed circumstances.

The book has some fabulous accounts of Rare Birds throughout the 80's, most of which I obviously wasn't involved in, as I was still kicking a ball about.

The book is fantastic. I've had it since it was published but never read it completely. I just dipped in. It's really helped during this suppression (in more ways than one). Terrific accounts from various sources throughout Britain, recalling special birds and memories from the all four corners. Some contributors are familiar, some acquaintances and some I even like to call friends.

A lot of the information, especially from the 80's and 90's is new to me. I guess I only became "serious" around the turn of the Century. So, I've not done too bad, especially as I've "let some go".
Always selective!

Anyway, if you're into Rare Birds and haven't read this book, it's thoroughly recommended.

Locally I've managed to bump my Holmpton Year List up to 99. The latest addition was a Hobby over the garden this lunchtime while we were eating our salmon sandwiches. Felt like cheating in a way! STILL no Swift for me?

Let 'em come to you?

A late afternoon stroll North produced the unlikely sight of a Common Sandpiper on the cliff top grass... 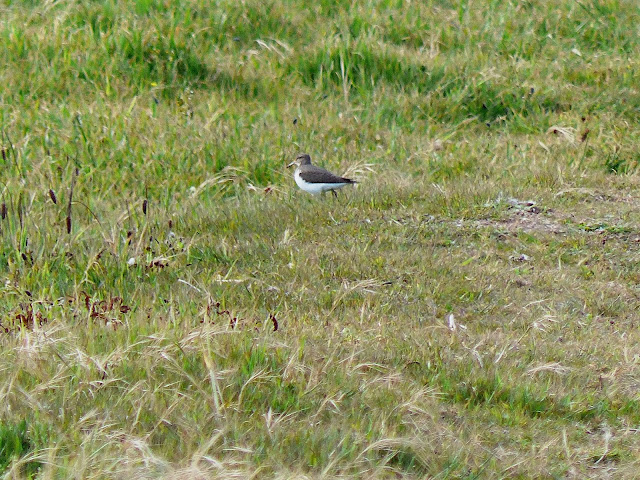 Ebird building continues. Great memories adding my significant British sightings at the moment. It's interesting (at least to me) how some species have become scarcer and others far more common (inevitably, in fewer numbers). An example being Golden Eagle. I saw the last breeding English pair (sadly) at Haweswater in 1991 and then a remarkable record for Yorkshire at Gouthwaite in 1992. Happy days!

Posted by Alan Whitehead at 19:33 No comments:

I guess you could say that the recent winds have been less than favourable for migration, here on the NE coast! Constant buffeting by the northerlies can be dis-heartening, especially with the lack of cover around the Village.

Still plenty of time for things to pick up...a Cuckoo and/or a Swift would be a good start!!

The only time I've been in my car is to Tesco and the Post Office, so the fact that the official line is now "local journeys are now permitted for exercise" means I can consider visiting other (remote) areas of the Patch...infrequently. Some variety at last. I'm happy birding the Village but you can have too much of a good thing!

A decent bird, that is in the public domain, namely a BROWN SHRIKE turned up at Bridlington yesterday (still present today). Various opinions on-line (surprise,surprise) regarding the releasing of news. For me...it's keep yer head down and mind yer own business. I always keep myself to myself...

Posted by Alan Whitehead at 21:14 No comments:

Time for a breather

As the wind and rain battered against the window this morning I simply turned over and went back to sleep. Bliss!

A slow day was had reminiscing over past trips and sightings...another one of those "things to get around to". I'd always wondered exactly how many times I'd been to Texas and Stateside in general? Well now I know. After cranking up the old computer it appears I've had 13 trips to Texas (471 sp) and 26 all told including Alaska (686 sp) which has taken us to 40 plus States. No wonder I'm skint! I've had one helluva time though!!!

These facts are not aired in any boastful way...just a statement of fact...for the record. Just think of the other places I may have travelled. It really doesn't concern me though, as I'm VERY satisfied with my choices.

World Birding has never interested me. Yes, I've been a few places including Australia but nowhere gives me the "buzz" that I get Stateside. It's not just the Birds. I love the history, hospitality, infrastructure, scenery etc etc. Many friends have been made over the past 20 years and I hope we have some more adventures to come, after missing out this year.

The advent of eBird and Internet resources in general has no doubt enhanced Birding but I try to keep it "Old School" as much as possible. I still use a notebook!

I've really enjoyed the hard yards of the last few weeks. If nothing else it's helped me lose 20lbs! Quite pleased with amassing 96 species so far, although friends up and down the coast will find that "modest" to say the least. It's a marathon not...

My best Holmpton year total is 130 (don't laugh) which I acheived in 2018, so hopefully I can top that this year with all the extra hours I have at the moment. We are lacking certain habitats here.

Anyway, enough for now...this is getting rather long-winded. I'll leave you with a couple of birds to brighten the prose which I saw on my winter trip to Texas in December 16. You know how it is...you hope to get lucky and I certainly did with these two...

AMAZON KINGFISHER. Laredo...(3rd record for Texas and the ABA) 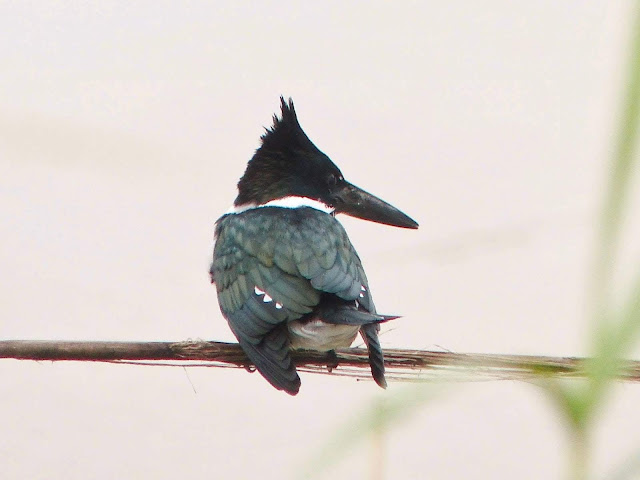 
Posted by Alan Whitehead at 19:38 No comments:

An even better morning!

Acting on Richard's message that he'd heard a Cuckoo first thing, I made my way to the SW corner of the Village for my walk. It was the best day so far and there was definitely a hint of Summer...at least for today!

I didn't have any luck regarding the Cuckoo but I enjoyed the local Yellowhammers... 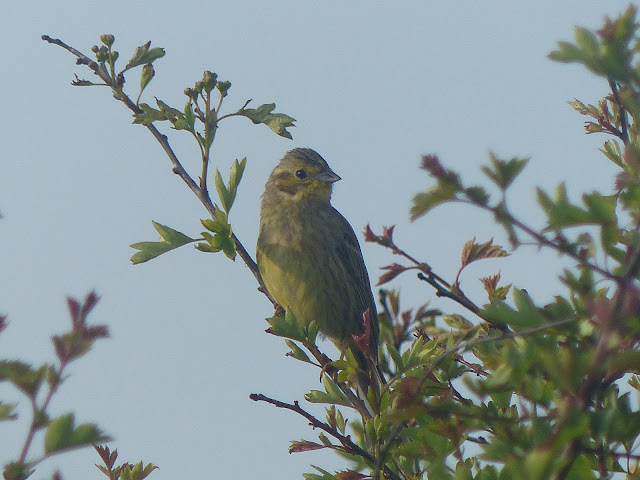 Another species we are fortunate to have in good numbers locally and shouldn't be/aren't taken for granted.

As I was over this section I decided to take a stroll along Rysome Lane by the underground Bunker...

I've not walked along here since "lockdown" began. As I passed the area and started to ascend the road to the crest, I spotted a medium sized bird with a distinctive flight...and a WHITE-RUMP!!! No, bigger than a Wheatear... 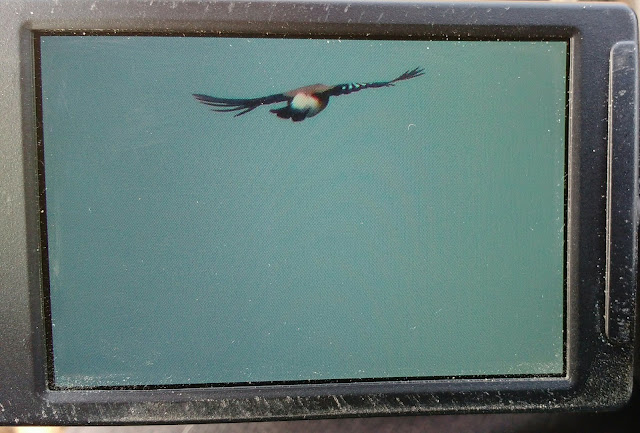 My first Jay for the Village and self-found to boot. After missing "Richard's bird" this was doubly sweet. I love the nuances of Birding. The fact that I was in an unusual area and scored with a top find. This was my 177th species for the Village. It was only in view for a few seconds and I couldn't re-locate it.

You can actually scope the Humber from the crest. Now that's optimism for you!

Posted by Alan Whitehead at 18:40 No comments:

A few notable sightings this morning on our walk South to Cliff Farm, so I thought I'd share them with you.

Things started well with a couple of Yellow Wagtails in the paddock... 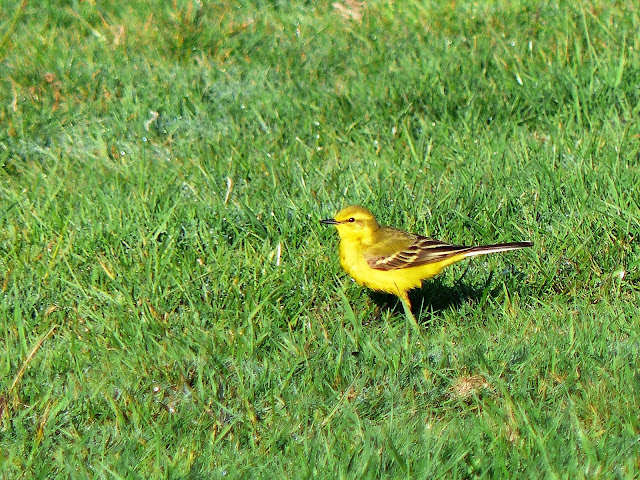 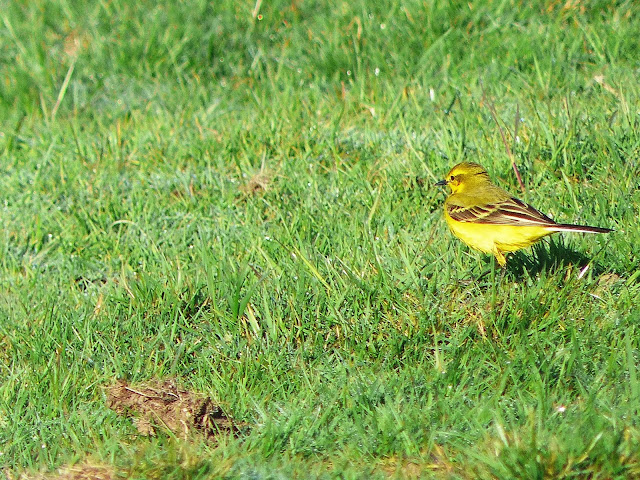 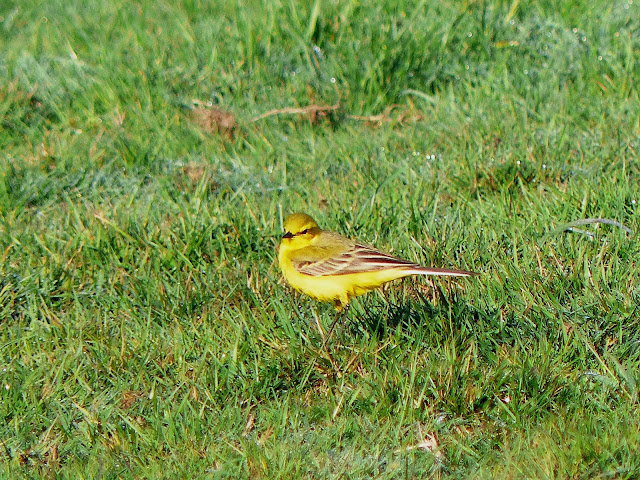 Even at 7.18am they looked like they'd been plugged into the mains!

As I approached Old Hive it was obvious that the Sand Martin colony had increased in numbers...significantly. 120 was a conservative estimate...great news! I've also discovered a small colony near the Sewage. Definitely more about this year.

As I reached the Copse I could hear a Willow Warbler singing.Unusual for these here parts. I also had a Chiffchaff...that wasn't singing! A couple of Whitehtroats and a Lesser completed the action. As I started to walk up to the Farm I could see a copuple of Wheatears on the path. Unfortunately they were "into the sun" but I managed an image of one... 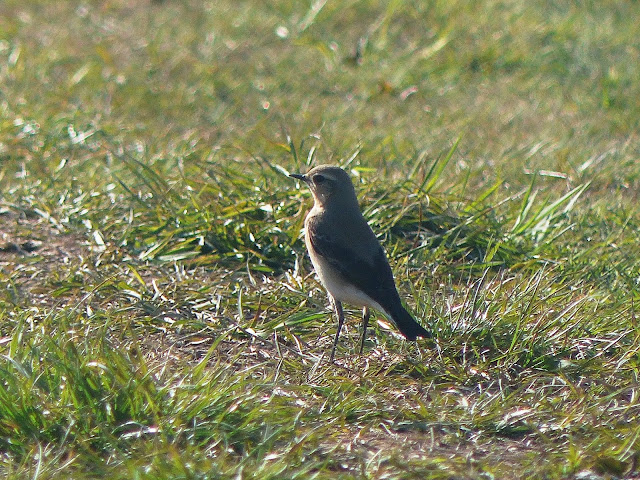 Further up we (inadvertently) flushed a pair of Grey Partridges. Another fine male Wheatear greeted us at the Farm... 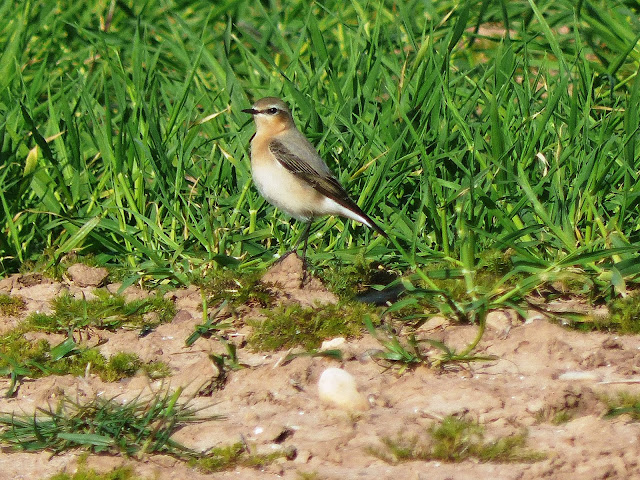 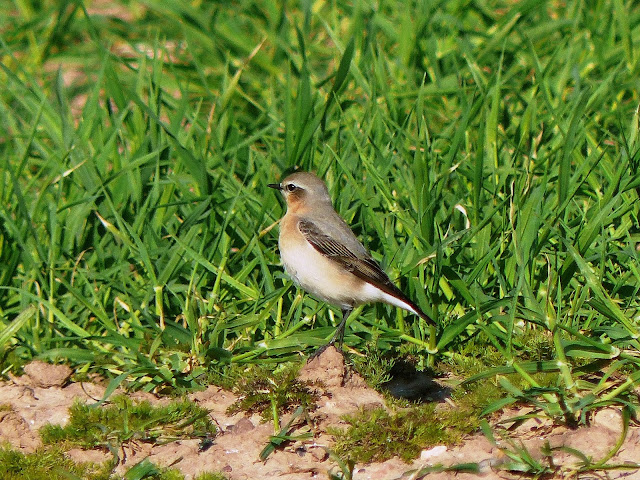 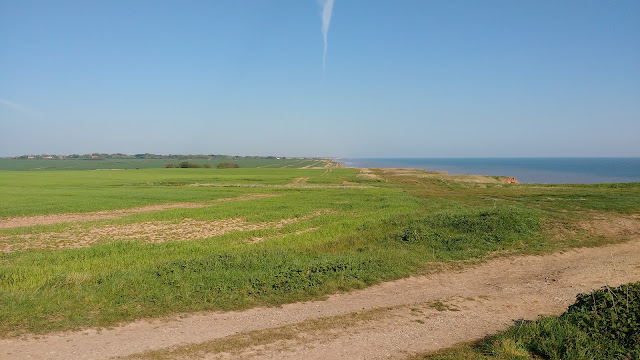 ...I spotted yet another Wheatear, this time below the path on the cliff...Nice to get a different perspective... 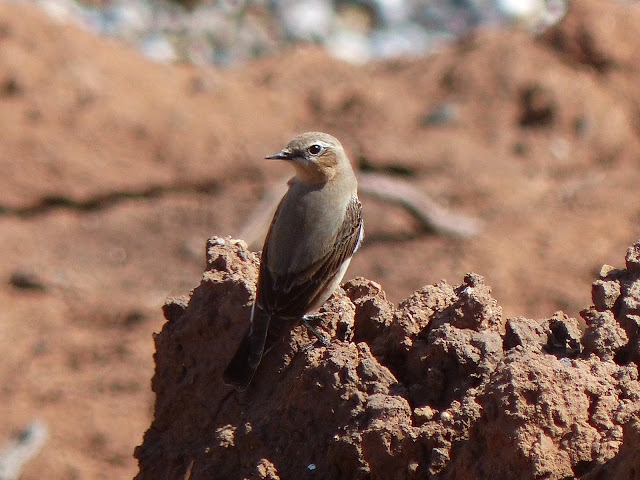 Early afternoon I sneaked a Bullfinch for the Garden Lockdown List, taking me to 53.


Posted by Alan Whitehead at 16:47 No comments: 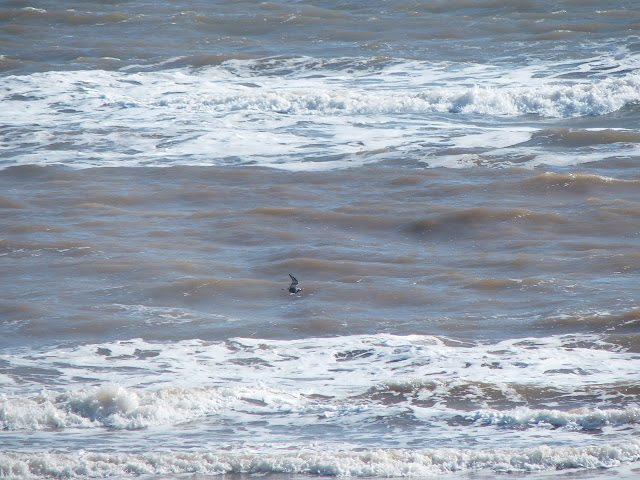 ...taking me to 92 for the Village. ANY wader here is noteworthy!

Still no Swift for me?

Prolonged sessions in the garden have meant some intensive study of the local avifauna. I've really enjoyed it, especially the Robins ability to mop up all the scraps! 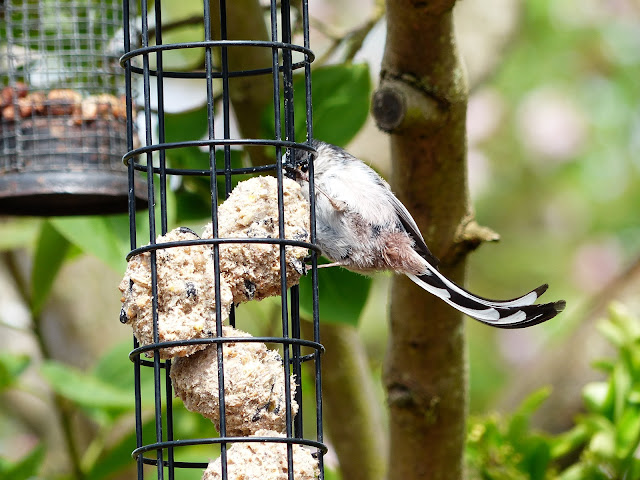 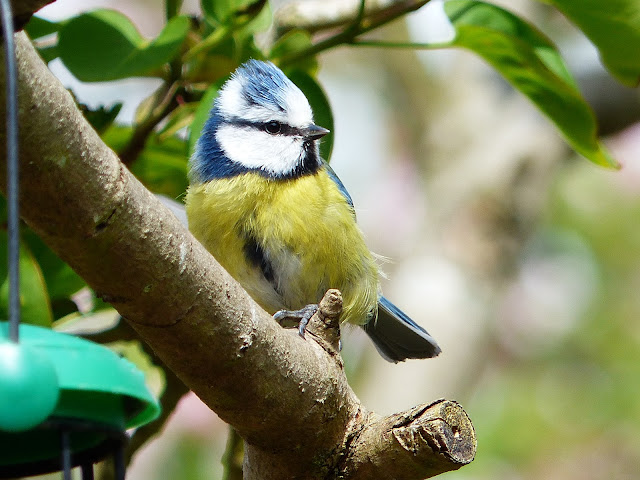 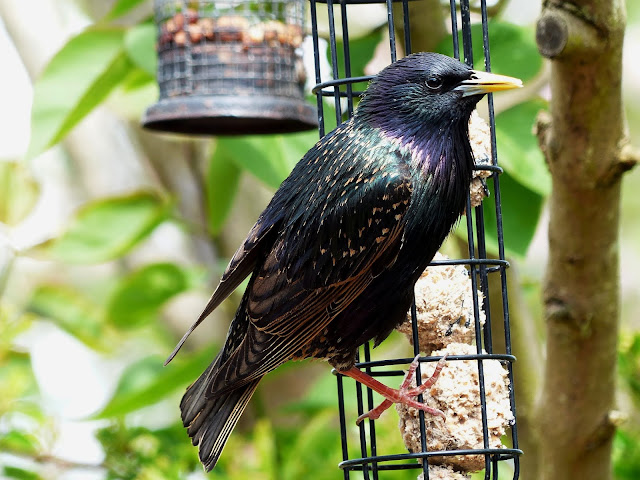 All going on above our Siamese! 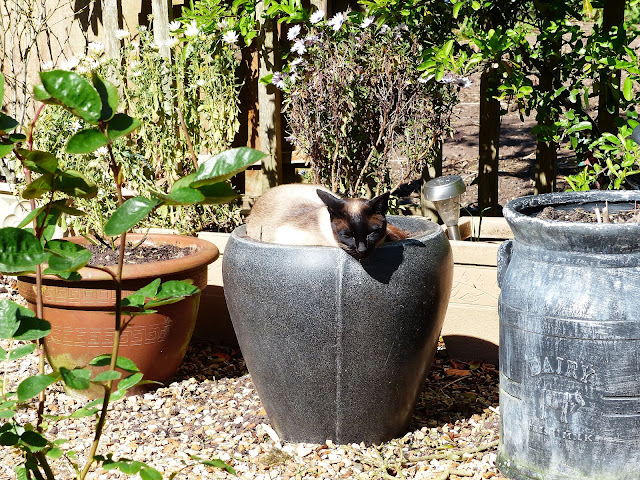 Posted by Alan Whitehead at 22:21 No comments: 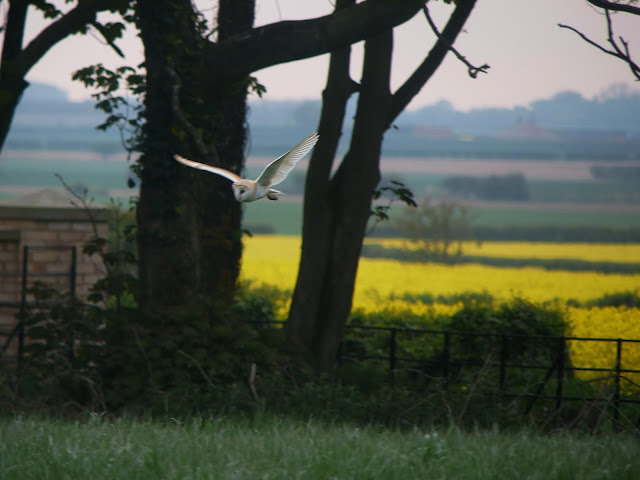 Always been one of my favourites. So lucky to enjoy this bird from the Cottage...


Posted by Alan Whitehead at 18:42 No comments:

Have to say it's getting that way for me now. Definitely wouldn't suit me being couped up long term. Still, has to be done for the foreseeable...and I'm fortunate to be located where I am...and appreciate that.

Daily diary updates are out now...even I'm bored with that!!

I've decided to mix things up with some posts on past incidents/adventures and intermittent posts on local happenings...when something I consider significant occurs. Seems reasonable?

Made it to 90 for the Village this morning when a lone House Martin got mixed in with the local Sandies.

I've been passing time with jobs (the ones I've put off for years) around the house plus transferring my records from my Bird Recorder programme to eBird. Bringing back some great memories while safeguarding my records. Secured my Village records and just finished adding my Scilly sightings. Good fun! Texas next...

Daily sightings of Great Spotted Woodpecker and Tree Sparrow at the feeders are not to be taken for granted.