My new policy of spending more time watching from the house is paying off...at least initially. Family parties of Bullfinches, Greenfinches, Wrens, Dunnocks and House Sparrows are seen daily. Migrating Swallows (c50) perch readily on the wires between feeding forays. This morning I spotted another "yellow" juv Willow Warbler in the hedge as well as a couple of Bullfinches. Luckily they hung around long enough for me to record their presence. 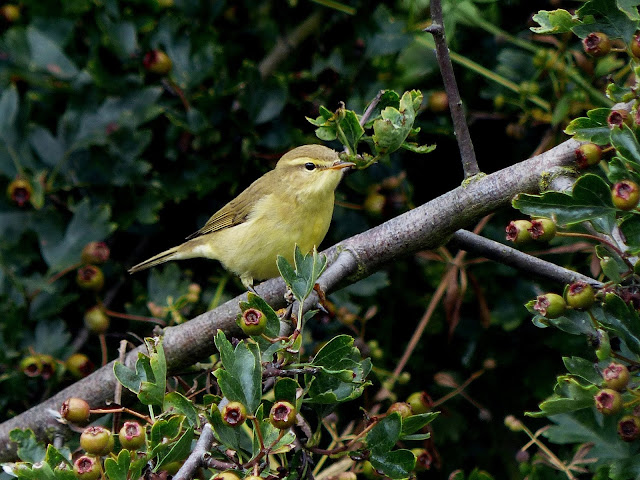 The dog walk was enhanced by numerous Swifts (c100) at low level hawking over the arable. A fine sight indeed...as was the thriving Sand Martin colony. Worse places to be...

Popped down the road for the first time in a while. I was hoping for a Wood Sand' on Canal Scrape but had to settle for a Common (S.101, S.72). The White-rumped Sand' is still about but very elusive. ..

Posted by Alan Whitehead at 12:05 No comments:

My first returning juv Willow Warbler (H.82, P.100) shot through the garden this morning...
Posted by Alan Whitehead at 15:24 No comments:

This evening I had FOUR Bullfinches at my Birdbath...all drinking at the same time. Family party me thinks. A fabulous sight for us both!

I've been adding my State sightings to eBird, after Texas I've been "touring" Arizona, California and Florida. States further North still to added. It's bringing back some great memories way back to 1993 and saving them on-line for posterity. I'm sure my sons will love perusing them!?
Posted by Alan Whitehead at 20:31 No comments:

Had a long walk down Skeffling bank this morning. The tide was in but not many birds hugging the edge. Highlights being 3 Little Egrets and c30 Curlews .

Still busy adding my old records to eBird. I'm "in" Australia at the moment. Was it really 16 years ago?! Bringing back mixed memories as I had an extensive tour planned, which I still completed but under less than ideal circumstances. A decision to take a female (non-birder) companion back-fired badly!!! I'll leave it there. I was surprised I managed to log as many species as I did...134. Obviously many more went by the wayside. I did try for Cassowary but my time was limited (a big regret)...a recurring theme throughout my visit.
Posted by Alan Whitehead at 14:58 No comments:

Bud walk on the beach produced a small flock of Dunlin (H.78) south... 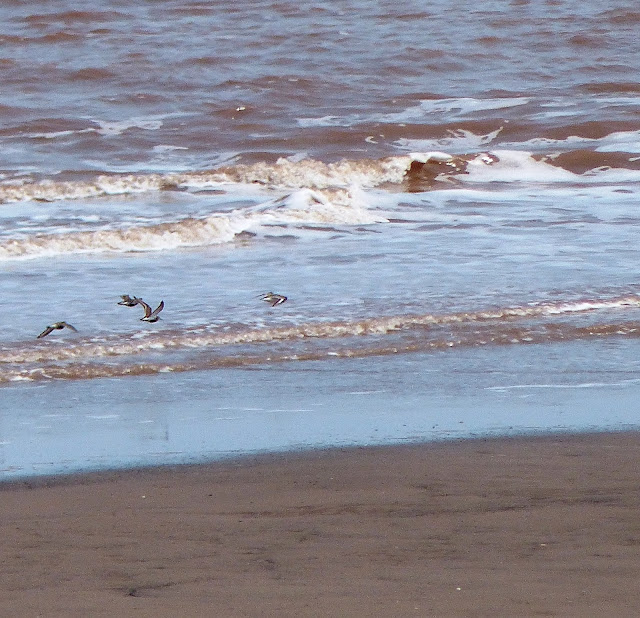 I also saw my first loafing terns off the Sewage...

Posted by Alan Whitehead at 12:26 No comments:

After leaving my car at Phil's we drove down to Frampton arriving around 10. We decided to try for the Turtle Doves first so Phil drove us down to the viewpoint. It was already very hot and there was obviously a significant heat haze.

We set our scopes up and waited. Phil checked out the reservoir while I concentrated on the dead tree in the far corner of the field. Wood Pigeon, Magpie, Collared Dove...but no TD. After around 20 minutes my perseverance paid off when a single bird flew into the dead tree and started to preen...

After this success we drove past the visitor Centre to the far end of the reserve and parked up. We scanned the assortment of waders that were showing fairly well from the fence. The Ruff were VERY smart, I particularly liked this one... 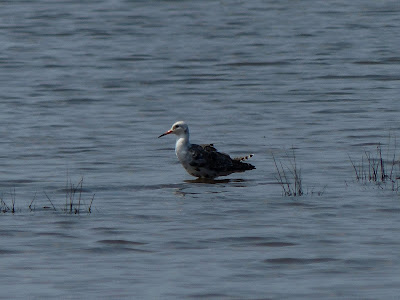 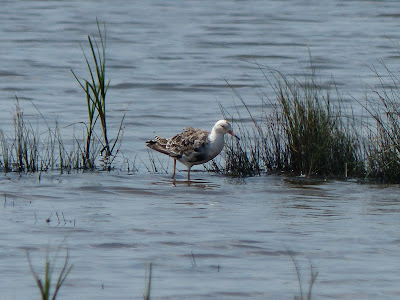 There were also decent numbers of Black-tailed Godwits displaying their finery... 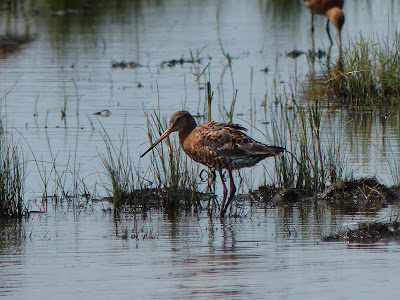 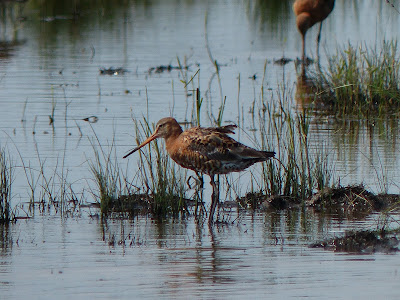 Phil then picked out a couple of Little Stints that soon disappeared amongst the many grass tussocks.

We then had a walk up onto the flood bank. Nothing of note was seen BUT we did see three Spoonbills at the far side of the Marsh.

After returning to the main car park we entered the central part of the reserve and entered a hide. We managed to pick out a couple of Common Sandpipers and a LRP. We'd been in the hide around 30 minutes when I noticed a small bird behind some reeds...a Black-necked Grebe! It was soon joined by a juvenile, the first I'd ever seen! We tried another hide which produced a smart pair of Great-crested Grebes.

On the way back to the car we had another opportunity to view the BNG fortunately the bird obliged... 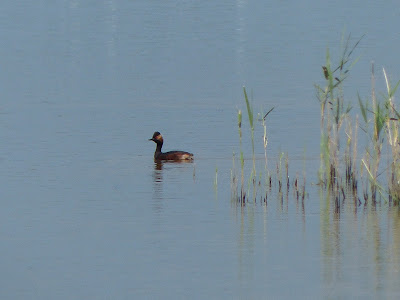 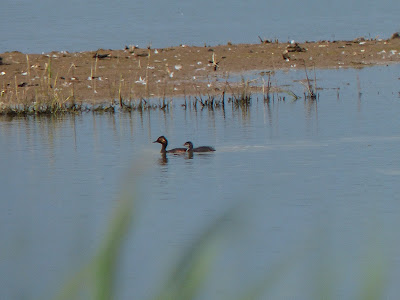 Always a pleasure to visit this fine reserve...

Posted by Alan Whitehead at 21:24 No comments:

At this quiet time of year I've been keeping myself busy by adding my records to eBird (as well as watching some unbelievably good sport). Hard not to be self-indulgent on a Blog I guess? At least it will secure my sightings on-lime...hopefully! While not having the flexibility of my BR programme it's good enough to make adding records fun and interesting. I've even dug out a few trip reports off Surfbirds. Some great memories from a crazy 2005 US trip here...and our visit to Alaska 2007 here.

Also while I'm about it I thought it might be a good time to mention again the purpose of my little Blog...apologies to long time followers! I don't purport to be any kind of expert. I just like reporting my sightings and adventures near and far, mainly in diary form. No long-winded ID monologues or revolutionary ground breaking issues here. I have been known to share the odd controversial opinion now and again!

If you have followed my ramblings short or long term I thank you. I will continue...because I like to do it...

Posted by Alan Whitehead at 11:21 No comments:

Young Swallows feeding on the wires outside the Cottage this morning. Always nice to see. Posts rather succinct at present. No detailed entries at the moment, too busy watching the sport! Still, keeps things ticking over. Trip to Frampton planned on Tuesday with Phil. Hope to provide something of interest then...
Posted by Alan Whitehead at 12:21 No comments:

Still at least 3 Song Thrushes belting it out in the Village (one on our aeriel) and the LW is still going down the hill.

100+ Swifts feeding over With' yesterday evening. I also found another Little Owl near Hollym which was encouraging.
Posted by Alan Whitehead at 13:46 No comments:

I awoke to news that the wandering SOOTY TERN had re-appeared in Bridlington Bay!!! I decided to give it a go down the road. You never know? I positioned myself with my lad by Sandy Beaches...and waited. News soon came through over the radio that the bird had gone North! Hopefully "we'll" get another chance later this year.

Posted by Alan Whitehead at 21:55 No comments:

Nice surprise last evening with a singing Lesser Whitethroat at bottom of t'hill. Quiet doesn't quite cover it at the moment...

Posted by Alan Whitehead at 14:29 No comments:

Great sight this morning as at least 50 Swifts were seen screeching over Withernsea early morning. Family groups on Queen's St and Bannister St.

A family group of Dunnocks in the back garden this evening was another uplifting sight.
Posted by Alan Whitehead at 20:50 No comments:

Popped down to Old Hive again to check on the Sand Martin colony. Conditions were right for feeding over the adjacent arable fields. A conservative estimate would be 300 birds... 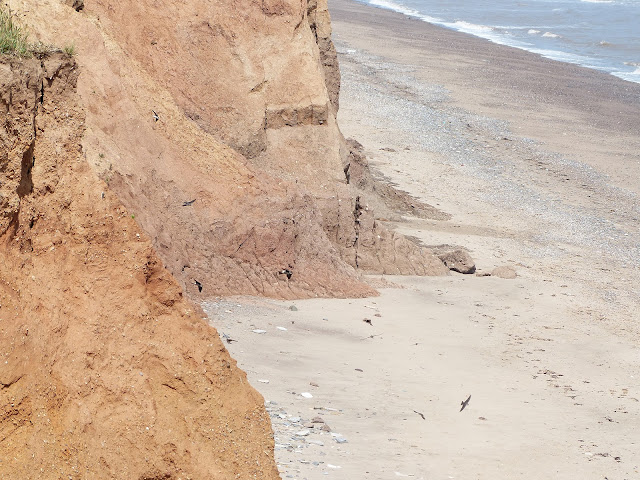 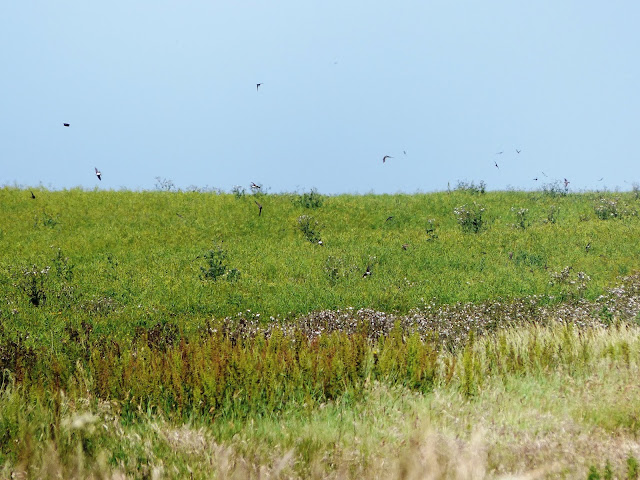 MEGA excitement for a few yesterday with a GIANT PETREL sp seen in the NE! Amazing record of an Antarctic species.

Busy preserving my records on-line at the moment (BUBO and eBird) during this (generally) quiet spell. Much fun being had as many wonderful memories are re-kindled. My old faithful is still performing well BUT no guarantees it will last! I persevere with this antiquated Bird Recorder programme (bought on floppy discs in 1987) as it's a joy to use.