Went down early this morning having risen at 6.30 with Louise. Saw the day break over the Carrs enhanced by a cloudless sky. Groups of Whoopers flew south down the valley...no roost last night after the cannon netting session...funny that!
Around 11 I got a text off my mate Arnie Cowan informing me that a birder had seen a Short-eared Owl this morning. I gave it a go from 2.30 till dusk...no joy and still no Whoopers...

Posted by Alan Whitehead at 17:39 No comments:

Spent some time sat in the Geoff Smith hide today. You can only look at cattle grazing for so long! No, there were birds around, you just had to look hard and be patient (not one of my strengths except when Birding). The Whooper herd flew in...I counted 51 with many immatures, a couple of distant Buzzards floated around over Aughton in the winter sunshine. An old couple joined me and couldn't understand why there was no water! I remained politely silent. A while later, the highlight...2 more Buzzards approached together from the direction of Bubwith Ings. Closer and closer they came...over the river, still closer...then one flew right over the hide at around 30 feet giving superb views...if only I hadn't left my camera at home...AGAIN!
Posted by Alan Whitehead at 17:11 No comments:

Well, took Lou to the flicks last night to see the BIG YEAR. Loved it! Yes, it's Hollywood and there was obviously some poetic licence but it WAS based on a true story and Birders try to beat the record every year. The acting was excellent and it had a strong cast which helped to develop the story's strength. It expertly explored the effect it can have on relationships...and finances. We can all identify with that! Having travelled extensively in the States and built up a 650+ list I could relive many locations I had been fortunate enough to visit.

I've already mentioned that John Vanderpoel is attempting to beat Sandy Komito's record of 745 and as you can see he's in with a shout! He's on 738 with 22 days to go...just 8 needed...should be worth watching...
Posted by Alan Whitehead at 12:04 No comments:

Decent herd of Swans out on the Carrs this afternoon. Grilled them for a good hour but not a sniff of a Bewick's Swan. On a positive note there were a good number of young birds (15+) amongst the 25+ adult Whoopers. Accurate counting was impossible as they fed in ditches at times and were constantly on the move.

My first view this winter of the "yellow-bills" inspired me to change my header photo...that and the forecast for the week!
Posted by Alan Whitehead at 17:56 No comments:

Nostalga...it IS what it used to be!

Went with Louise and Mother to Chester for a Christmas shopping extravaganza. I then took the reins and drove to a nearby bridge and waited. Out in the distance I eventually saw white smoke... 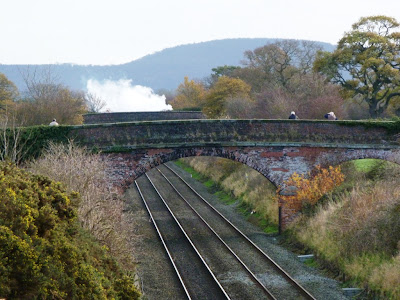 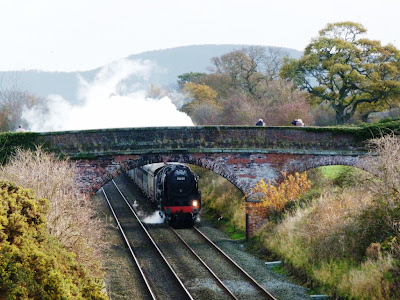 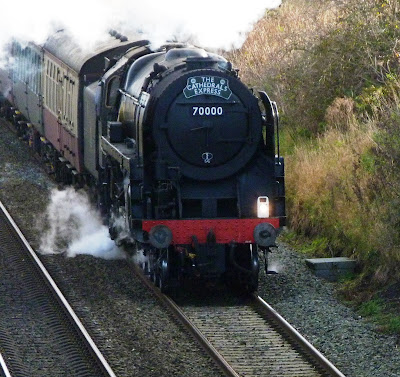 I then drove to the Station to soak in the atmosphere with c500 other enthusiasts plus many surprised, casual admirers! I was much more impressed than I thought I would be. The engine was in immaculate condition...the smells and the sights brought back many childhood memories. 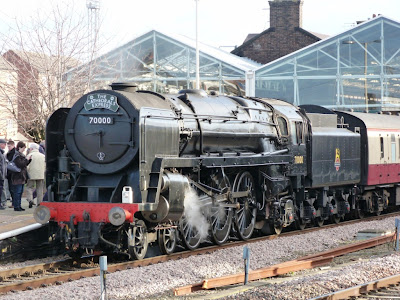 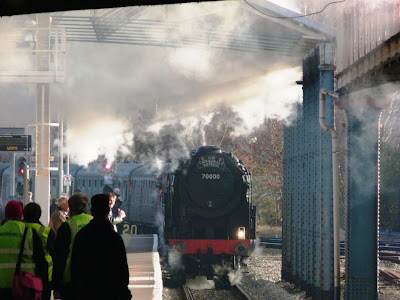 In today's disposable society it's refreshing that some parts of our Heritage have been preserved for future generations to see and hopefully appreciate...I do.
That was the end of the fun as I sunk into a long shopping sit!!

Two young birders that I went to see the SANDHILL CRANE with went down for the WESTERN SAND' today. Tom texted me to see if I wanted a lift...cheers pal. We were still over in Bury and fortunately I didn't "need" it as I saw the Aberlady Bay bird in August '97. Glad you connected chaps...got your number now Andrew.
Posted by Alan Whitehead at 20:12 No comments:

Made the DESERT WHEATEAR pilgrimage today. I'd had a habit in the past of leaving it too late to go and see birds of this family. I like Wheatears...perky, smart and easy to see! I arrived at a perishingly cold Bempton around 1.30. I gave the young lad a few throws of his ball, then left him in the car and made my way gingerly down the path. Major improvements going on here which was nice to see.

I'd only gone around 20yds when a Short-eared Owl flew virtually over my head!! 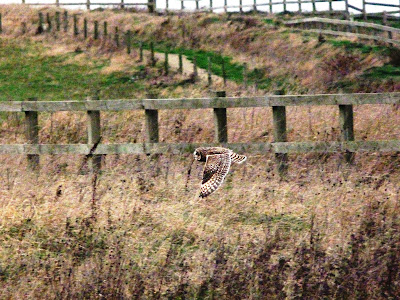 ﻿I continued the short distance to the cliff footpath. Just as I reached the fence I noticed a bird flicking around on the path...surely not? Bingo...DESERT WHEATER! 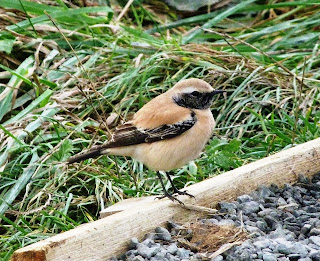 The little cracker had been frequenting an area a little way along the coastal path, so it must have known I was struggling a bit. It was so tame it probably would have perched on my crutch if I'd stuck it in the ground!
It continued to feed in the immediate area around the grandstand viewpoint until I left a short while later. SEO's were almost constantly on view quartering the fields and frequently swooping over the cliff edge...spectacular stuff. This was the star of the show however... 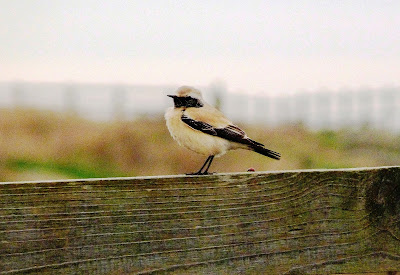 ﻿Footnote: Just to back up my earlier comment, I've just added the record and realized I've only seen 1 previous DESERT WHEATEAR in Britain...at Burniston 27/11/1989!!!
Posted by Alan Whitehead at 17:51 No comments:
Newer Posts Older Posts Home
Subscribe to: Posts (Atom)