SWALLOW-TAILED GULL
Posted by Alan Whitehead at 17:05 No comments:

ANY wader is noteworthy at Holmpton!

An hour down the cliff early doors had only produced a single juv Bullfinch and a chat with Richard Boon. As he drifted off through the undergrowth (I wimped out due to short attire) I heard the distinctive 7 note call of the Whimbrel (P.130, H.88). A quick scan produced three birds heading South off-shore. I thought that would be that...but then more "peeping". Now a flock of 5! They circled a couple of times and then continued South. An excellent local record.

My pal Trevor found not one but TWO GREENISH WARBLERS at Bempton!!! I must try harder...

Off to London tomorrow for a review of my hip. Then on Saturday I'll be treading the hallowed turf at Gigg Lane as I've been invited to be guest of honour at the Scunthorpe game. I'll be a nostalgic trip down memory lane! Looking forward to it and I'll be great for my wonderful Mother.
Posted by Alan Whitehead at 21:06 No comments:

There's more to life than birds you know...like...decorating! It's that time of the year when I've run out of excuses NOT to do those jobs that need doing. So, the cottage has been painted inside and out. This has given me major credit for the upcoming Autumn Birding!

Tragic happenings in the Lone Star State that you may have heard about. TWENTY FOUR inches of rain in 2 days!!! More than Manchester gets in a year! We experienced a taste of this on our last trip when we arrived in Houston to find my first targeted site (Bear Creek Park) was under eight feet of water. Needless to say I didn't connect with my Greater Pewee.

A few migrants have started to filter through Spurn. An Icterine Warbler was trapped this afternoon and a few Pied Fly's have been seen. I guess it's time I joined in (I worked Monday and today).

I'm determined to give the Village the full treatment this Autumn...time will tell?

Posted by Alan Whitehead at 20:52 No comments:

As I sit here recovering from my last escapade (both mentally and physically), I just wanted to record a few thoughts on twitching/chasing in general.

It was great to see so many familiar faces of all ages scattered around the site of the dearly departed bird. Yes, everyone was disappointed...obviously. A lot of effort had gone into reaching the site for many and the morning vigil from pre-dawn was a laborious one in conditions that were more suited to October.

For us it was an all-night drive from deepest East Yorks...a round trip of 686 miles. No regrets for a star like that.

The atmosphere was convivial with many conversations striking up as the morning progressed as it became more and more apparent the bird had moved on. Personally I was surprised at this. I felt it would stick around and feed up. That's the thing you see...you just never know...all part of the "fun".

As you know, I've been stung in the past by the "wait for news" strategy. The late charge hoping it will still be there is a feeling I can do with out. This is followed by the even more sickening feeling of searching for the bird (almost exclusively in vain) when it's disappeared! Yes we all dipped...but we were THERE!

As I'm now a selective twitcher I have a slightly more relaxed attitude to the outcome....or at least  think I do!?

The jewels from across the pond are a particular favourite for which I'll definitely go the extra mile...again.

Posted by Alan Whitehead at 16:11 No comments:

I'm in the game...this time! 13 years since my aborted attempt for the Barra bird due to mountainous seas.

A Bobby Dazzler. American Warblers are tops for me.

Be there at dawn.

Saw many dedicated twitchers, many familiar, both young and... older than me! We deserved better but didn't get it. There'll be another... maybe sooner than I think?

Posted by Alan Whitehead at 22:05 No comments:

News came through yesterday afternoon of a "stint" at Nosterfield showing apparent palmation!?

Did I go? No. I should have though.

The bird was present till dusk. Up at 5 and breakfast at McDonald's for 6.30 after a stretch for Bud. No news online so I waited for the Pager to wake at 7 (risky). Sure enough, news came through "it" was still there.

Fair drive in the largest County (91 miles). I'd been here a few weeks ago for the Sabine's Gull, so I drove to the Village. As I approached I remembered the location of the reserve which a different spot. I pulled into the car park and sorted out my gear.

Chris a mate of Barry Bishop was just leaving. We had a brief chat then I headed for the screen. Fortunately there was room to view.

The viewing area was distant...
﻿﻿﻿
﻿Scope out and scanning. Picked up the Peep. I watched it for around 30 mins...none the wiser! I would have said... Little Stint. I know, I know...sounds smart, but there you go. I texted a few pals including Trevor and we discussed the "apparent" palmation. Real, shadow, mud etc. The distance (c100yds) made confirmation difficult. There were many snappers hard at it and I was sure someone would get something conclusive eventually (lets face it there's blanket coverage of everything these days...a double edged sword).

They did...it was a Little Stint.

Now here's the thing. Since the confirmation photo appeared... 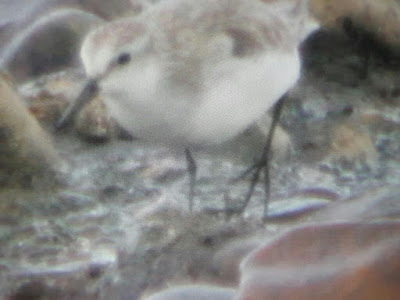 ...there's been a lot of comment on the dreaded "social media". Some supportive but alas plenty much less so. Lots of...I told you so...with more than a smattering of smugness. The bird DID appear to show palmation. There were various comments on structure, bill size etc. Very difficult.

For me...better to give the troops the heads up, as the alternative scenario is far less palatable.
Posted by Alan Whitehead at 20:46 No comments:

Something always turns up...

Adult Rose-coloured Starling in Scarborough and Western Bonelli's Warbler in Easington. A couple of great records...for August. Very deceptive however. Tough to find these little gems...guess that's why they're scarce/rare!

A combination of work and trip planning has seen me off the pace this last week. I'm in training for the oncoming flood of "great birds" the coming Autumn will produce. I can dream. My trips for the next 12 months have been finalised...I'm not driving a bus for the good of my health!

The Autumn will be spend flogging Holmpton and surrounds. Then early November will see us leave for Texas for three weeks to escape the gloom. Christmas at home with family then hopefully my knee replacement in January. Some rehab, then it's a return to Cyprus in March for 3 weeks. Really enjoyed it last year and met some great people.

Spring Birding in Blighty then it's a change of scene. A report by Brendan Shields got me interested in a trip to the Canaries. I've chosen Fuerteventura...less people and more birds!

I'm at a stage now were I'm hoping to strike a balance between British Birding and foreign travel. The Birding gods will decide how fortunate I am. There'll be the usual ups and downs but I'll  be fun...and that's what it's all about...isn't it?

Posted by Alan Whitehead at 17:32 No comments:

Acting on a tip off from Duncan Bye I spent 6.30 till 12 listening, rather than looking for Corncrakes... 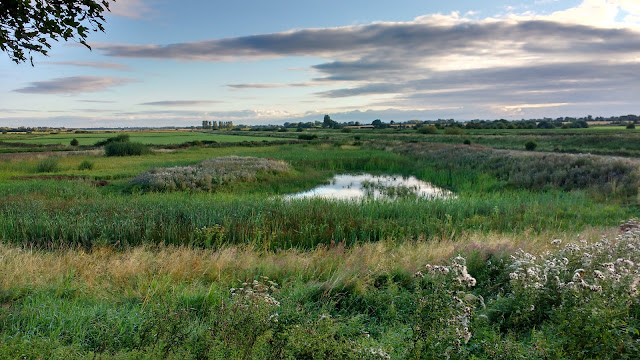 Not surprisingly no joy but marvelous to know they have graced the reserve. No secret now and a great success story with excellent cooperation with the local landowners.

The highlight was having a good natter with Haydn. Great to see him. He arrived around 8 after a trip to Skippy and we left together.

A lone Lapwing (H.87) was a nice bonus as  passed the Holmpton sign...
Posted by Alan Whitehead at 14:25 No comments:

There's always someone doing a BIG YEAR in the States.

Stop Press: CASSIA CROSSBILL has been split by the AOS and THAYER'S GULL has been lumped with ICELAND...and Kumlien's!?

That's 2 Crossbills to go for now, as I STILL haven't seen RED CROSSBILL in the States. The only Code 1 bird I still "need".

There's a podcast here if you're having a slow day.
Posted by Alan Whitehead at 10:26 No comments:

Promising Northerly wind today. Nobody told the birds though!
Posted by Alan Whitehead at 17:05 No comments:

Needed a change of scenery so a text from Trevor at Bempton informing me an AS was floating around sent me Northward.

Unfortunately the bird hadn't realised I was coming and rudely left the scene.

Still, I had a good chat with Trev, discussing various birdy topics before returning home.


Posted by Alan Whitehead at 19:42 No comments:

There you go! I agree. Just a personal opinion.

Does a bird recognise man-made structures...ala mock stone housing estates? I doubt it.

This opinion coupled with a return south coast sighting makes me comfortable adding this species to my list.

I, like many others, have their own thoughts on certain decisions, both negative and positive...BUT for comparability purposes my Bubo badge is strictly BOU.

Posted by Alan Whitehead at 15:02 No comments:

Lazy lie in after a couple of 5am starts. I love early mornings!

E.Yorks Cory's Shearwater N past Spurn at 8.35am

Ah well. Might as well head for the cliff for the constitutional.

E.Yorks Cory's Shearwater N past Spurn at 9.10 am


Wonder if the angles are against me? Any excuse...﻿ 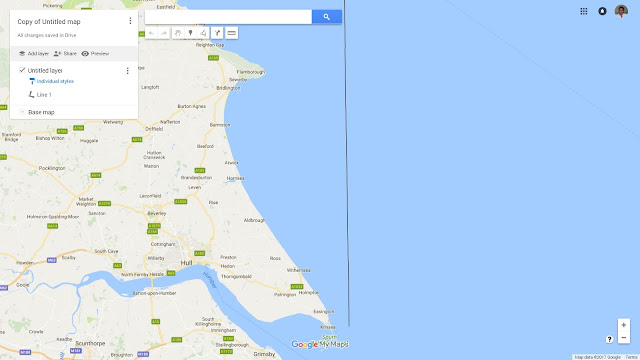 No matter. I gave it my best shot focussing on the Canada bouy(2m) in less than optimum conditions...much spray and haze.


Posted by Alan Whitehead at 10:24 No comments:

Giant bird in the Giant State

It has been elusive, mainly due to being on private land hidden by trees. However, it has on occasion soared high with the other species it's associating with...Egrets, Roseate Spoonbills and Wood Storks.

Wonder if it'll hang around until November? I doubt it!!!
Posted by Alan Whitehead at 19:48 No comments:

Into August and down the cliff early doors...well, at least for me (7).

Yellow blobs in the bushes. At least 6 young Willow Warblers. Nice and fresh.

Then another! I had to remind myself where I was. A Buzzard...long winged and tailed with a slim protruding head. The bird was initially fairly distant to the north. It then slowly drifted out to sea before heading south mixing slow wingbeats with long glides on slightly downcurved wings. I was convinced I was looking at a Honey Buzzard (P.129, H.86).

I texted John Hewitt to let him know it was heading his way... hopefully!

A major sighting and a great start to the "Autumn".