Woke up early this morning. As I was 'on my tod' I decided on the spur of the moment to re-visit Old Moor for hopefully better views of the SAVI'S WARBLER. Arrived to a long line of cars...surely can't be that many here? Drove around the roundabout to see they hadn't opened the gate yet! Eventually we all got in and parked and then trudged down the path again to the stake out.
The bird was heard singing almost immediately and within 20 minutes most people had managed to get very good views through a variety of 'scopes. I had amazing scope filling views of the bird singing through Gary Dayes Leica APO62, mine was somewhere down the line? The atmosphere was excellent with a very helpful attitude throughout.
Decided to go back home to drop the pooch off and freshen up. I'd met Richard Willison at Old Moor who said he was going to have a drive out to Spurn, so I decided to join him. Needed to pay a visit when I arrived , this almost certainly cost me views of a Golden Oriole which Richard had just seen at Sammy's Point! Never have had much luck with this species. Had a bit of lunch with the chaps then decided to return home as the weather went pear shaped.
Unfortunately this meant I caught some of the England game. Lets hope it's alright on the night!!
Posted by Alan Whitehead at 14:48 No comments:

For those of you who follow my ramblings I promised I'd give brief anecdotes of my favourite twitches listed in the RUSH BIRDS section of this Blog...So here goes:-
1. COMMON NIGHTHAWK - Scilly (Bryher) 24/10/1999
I'd paid a few visits starting in 1991 (Sora Rail). I'm tied to the half-term holiday, but at least I get one in October so I'm not complaining. I hadn't been every year due to having a young family but I'd managed to see some crackers nonetheless. Had been there a few days and was trying to keep costs down by not spending every night in the pub (it wasn't easy!). So I was blissfully ignorant of the news of the day.
Came down for breakfast chatting to the owners when a friend of theirs casually mentioned that there had been a report of the above flying around the pub on Bryher the previous evening (pre-pager days for me). Scramble!!!
Next thing I was down on the quayside with a boatload heading to Bryher.
We spent the whole day combing the island with no luck. About 5pm most people had decided to stake out the area it was seen in last night (made sense). Time marched on and the sun was setting...then over a CB came the unforgettable cry of "I'VE GOT IT". The bird still wasn't in view to most but eventually was located and seen by all flying around our heads with birders cheering, shaking hands and even hugging each other? A magic moment indeed. News was obviously put out and we had the bizzare scene of another boatload searing across from St Mary's in virtual darkness! After much deliberation this goes down as my ultimate RUSH BIRD.
Posted by Alan Whitehead at 21:45 No comments:

Time for Spurn to come to the party?

Whitehead's prediction is for something decent this Bank Holiday weekend. I say this just to add extra spice to my Birding!
What ever it might be I hope it's in Yorkshire (Spurn) rather than Cornwall...Collared Fly?
What do you fancy?
N.B. Added a few more links
Posted by Alan Whitehead at 20:43 No comments:

Everybody Happy...well everyone I know!

Joined the throng at Old Moor at 8. Marched down to the 'spot' and waited. Bird singing strongly but not showing...tension mounting! Then up it popped and sang in the sunshine, albeit briefly for me and Gary. Eventually showed to Haydn, Richard and Darren (British tick). Been a long time coming this one.
Night finished of well as I took Louise to school for her France trip, with a Badger running across the road right in front of the car and a Tawny Owl perched on a fence!
Posted by Alan Whitehead at 23:32 No comments:

Yorkshire Birders who's who!

Should be quite a line up tonight at the Savi's Warbler twitch. Most birders will need this bird for their list. Lets just hope it shows!
Posted by Alan Whitehead at 18:11 No comments:

Woke up early to the sound of the pager? Am I late for work? No early...must be something BIG!
Weird how you get the text message and the normal alert before the MEGA alert...surely it should be first?
Anyway...could I make it? Worth a shot for a BLACK-BROWED  ALBATROSS. Slim chance I know but how many chances do you get! The word "lingering" was the clincher. So off I went. No further news till I reached Flamboro' Head car park, negative unfortunately,,,so off to work.
N.B. I have a new number 1 Rush Bird...guess what? Also put list in chronological order (except top ten) with Best of Duff.
Posted by Alan Whitehead at 20:41 No comments:

Obviously went down this morning to see if the bird was still present. Alas it had moved on. Peter Roworth arrived about 8.30 to inform me he had arrived at 7.45pm last night to be greeted with the news it was still present but when they scanned again the bird had vanished! I had presumed it was there till dusk. Typical spring bird, not hanging around. Yours truly still on a high from the find. Hope that inspires you to find the BIG one on your local patch...can't beat the rush for me.
...and to think I only had to wait 24 years!!!
Posted by Alan Whitehead at 17:31 No comments:

It was my BIG moment! 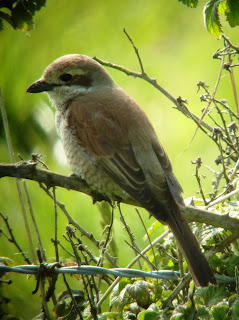 LAST ONE!
Posted by Alan Whitehead at 21:30 No comments: 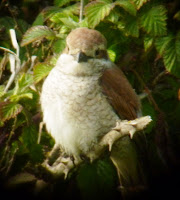 JUST ONE MORE!
Posted by Alan Whitehead at 21:17 No comments: 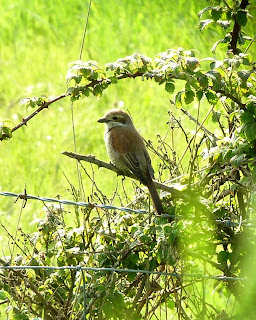 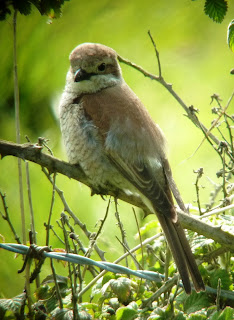 Had a run out with Louise to Old Moor. BROAD-BILLED SANDPIPER reported then dis-appeared. No matter ...nice cafe!
We arrived had a bite to eat and walked down to Wath Ings hide...I know how to show a girl a good time! We'd only just sat down when the pager sounded to the news that the bird was showing on Wader Scrape. So, off we toddled and enjoyed good if distant views in the ever filling hide. Very lucky...not a Yorks tick but still a very rare bird. Sat on a bench watching a constant stream of birders arriving, quite a few of which I knew...hope you all got good views chaps.
Late news of 3 BEE-EATERS  at Flamboro'...still time for some goodies.
Oh yes, nearly forgot,,,,....back to work tomorrow (about time I hear you say?)
Posted by Alan Whitehead at 21:45 No comments:

Here's hoping the increase in temperature increases the rare birds! Be great to have a Mega or two, both locally and nationally...mmmm lets see...what about a Yorkshire Collared Fly?
Locally, most stuff back now. Might try and find a Turtle Dove or a Spotted Fly...never thought I'd say that!
Tree Pipits noticable by their absence?
Posted by Alan Whitehead at 15:01 No comments:

Hard birding at Duff now. Combination of lack of rainfall, water being pumped off and vegetation getting higher everyday. There are still decent birds about however. Had flight views of Garganey and Marsh Harrier. Super optimistically hoping for a Purple Heron...but alas it wasn't to be.
Posted by Alan Whitehead at 19:39 No comments:

Couldn't help having a fiddle. Found a new template...prefer the format. Chuffed with the IBERIAN CHIFFCHAFF as a new Yorkshire bird BUT hopefully something more spectacular before the end of the month.
Posted by Alan Whitehead at 13:37 No comments: 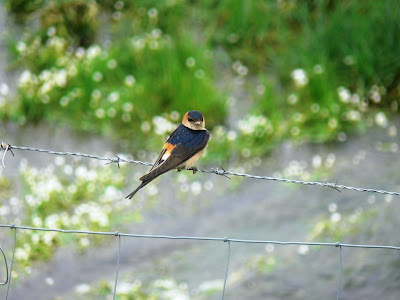 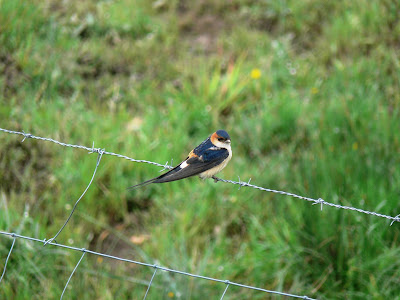 Thought I'd try a photo or two...again just because I've worked out how, plus in my defence I now have the internet at home (not sure that's a good thing). Don't worry...not that you were, but I don't want this Blog to become an album of endless bird photos, like many choose theirs to be (fair enough). I will from time to time post an image when I feel it's appropriate. Thought these two were definitely suitable due to the influx we've had lately...any good?  I have to own up and admit it wasn't taken in Britain as those of you who read my recent trip report might have sussed.
I say again I don't have top equipment or wish to spend hours trying to get "the shot" but if I happen to fluke a decent image or two I might post 'em.
Posted by Alan Whitehead at 12:57 No comments:

Having just seen the report of numerous W.T.Sparrows on the QE2...why not a House Finch jumping ship at Lands End?
It is possible...
Posted by Alan Whitehead at 14:38 No comments:

Walking the dog on Skipwith Common when the box alerted me to an IBERIAN CHIFFCHAFF at Potteric Carr. Missed the Spurn bird even though I made a belated attempt, so this was "grab back" time. A good walk down to the location and a brilliant moment when everyone was looking at the wrong bird...till the right one sang!!!
Posted by Alan Whitehead at 22:11 No comments:

Cadged a lift with Tony Dixon and Richard George down to see the HOUSE FINCH. Quite contentious to say the least! Obviously a big question mark over the origin.
For me negatives are:-
1. There are birds in captivity
2. Colour not good, relating mainly to incorrect diet, suggesting escape?
Pluses:-
1.Location
2.Time of year (been there at least a week)
3.White-throated Sparrow in Cornwall plus rare American moth on Scilly recently
4.Possibility of ship-assistance strong
5.I went!!!
Time will tell...the judges will decide!
Many thanks to Tony who drove there and back. Glad I didn't need the Pratincole...still recovering.
Posted by Alan Whitehead at 16:28 No comments:

Treated today to fantastic views of 2 Marsh Harriers. Did a big sit (yes sit) and it paid off with a great couple of hours watching an adult female and chocolate brown immature probable male (on structure). Despite being mobbed by a few Crows they showed their agility marvelously well covering the reserve and performing a double act on occasions. Also nice views of a male Garganey.
Hope to return to work in two weeks.
Posted by Alan Whitehead at 21:02 No comments:

Two brief snippets...Extremadura report now on Surfbirds (see link in reports section). Also you may have noticed the clock hasn't changed to summertime. Still having problems with this, anyway if I can't sort it by October it won't matter!
Posted by Alan Whitehead at 10:57 No comments:

Trying to build up energy levels before I return to the "Chocolate factory". Hope to go back in a couple of weeks. So, had an early visit down Duff and was rewarded with my best ever prolonged views of a Water Rail. I'd always fancied seeing one scuttling across in front of Garganey hide (sad I know) and that's exactly what happened! This was backed up by another cream crown Marsh Harrier sighting and a Wheatear...nice! There's now 5 singing Lesser Whitethroats on the reserve.
Posted by Alan Whitehead at 19:07 No comments:

Resumed local birding. Purple patch today. Followed up report of Red-rumped Swallow at Wheldrake...no joy. Vince had 3 Wood Sands there late morning. However, good birds flowed at Ellerton in the form of 2 DOTTEREL, a cracking Hobby and 5 Wheatears. Big thanks here initially to Pete Roworth who informed me early am. Yours truly couldn't find them! Late afternoon while in the hide at Duff, Vince entered informing me he'd just been watching them! Haydn arrived at that moment so we both set off to find them. Success this time. As we were enjoying great views of a York Area tick Peter arrived with his wife (who found them) to add them to his tally. Quite a gathering of local birders and a superb find.
NB. I've finished my trip report and I'll flag it up when it's published on Surfbirds.
Posted by Alan Whitehead at 21:48 No comments:
Newer Posts Older Posts Home
Subscribe to: Posts (Atom)